One Year Of Crimer Show

It was my first taste of (admittedly very minor) success and its attendant bummers – rude swearwords, bad manners, baffling parodies, the lot. Soon enough, the complaints came in: Why do people like this crap? Why do I have to see this crap on my timeline? Why am I following people who like this crap? Who is the idiot who wrote this crap? My heart went out to those people. I, too, was asking the same questions, except the last one, obviously. It was great that so many were enjoying Crimer Show but I felt bad for those who hated it. Occasionally, if someone did a really good hate on it, I’d take a look at their other tweets, and oh boy were they consistent! It was a very rare thing indeed to find someone who both Hated the show and was A Nice Person On Twitter. That sounds biased, but there you go. Either way, it’s not my place to respond or to engage someone in a debate about their taste – everybody should be allowed to express their opinions on Twitter. Good for them, I say.

Three things did get to me, however:
a) People who reckoned "it was funny for about five tweets but then it sucked forever". Pity they didn't stick around after the basic premise was established. Should they ever change their minds, I've got a sprawling crime epic waiting for them.
b) Confusing it with "lolspeak" (I hate lolspeak). And no, internet kids, I'm not "butthurt" - pull your trousers up.
c) The idea, flung about by a few people who clearly didn’t have the time or inclination to engage beyond a cursory glance, that there was something “twee” about the show, or at least the language therein. But hey! We lead busy lives! Who am I to judge?
With Freints, and more so with Crimer, I created a form of English (“Englesque”, if you forced me to put a stupid label on it) that I felt suited the ridiculousness of the content. Is it a dialect? Maybe. I dunno. I just work here. As the year trundled on, I used this “dialect” for other Twitter accounts such as Frasser Show, Goggl Serch, Terbil Draems, Trousured Mamories, A Insane Men and - for the Crimerfans - Crimer Buke, The Citey Poste and The Newes-Tiems Gazet. If you like it, you like it. If you don’t, you don’t. There’s nothing I can do to change that, so let’s get on with our lives and think about something like the Hubble Extreme Deep Field instead, for crying out loud. Plenty of my Twitter accounts use Actual English, so if you’re a fan of that, then dig in, because why not. They include The Book Of Flim, History’s Moments, News For Babies and Doctor Whomn’t. I created the Friday Night Disco website. I also represent Yannick from One Direction. I have 25 accounts now. Too many? Almost certainly. It’s been great to see Terbil Draems and Goggl Serch taking off, and I hope some of my other stupidities catch up eventually.
Thank you so much to everybody who’s supported it and/or all my other output over the past year.

And to the haters: Let’s dance. 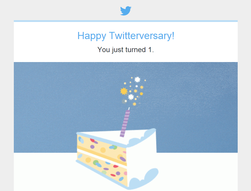