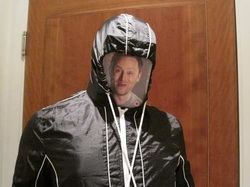 (L-R: James Thomas.)
I'm James Thomas, a humorist from Ireland.
I can be found on Twitter, at http://twitter.com.twitter.computers.
My username is @AstonishingSod and I write jokes there on that. I've been doing so for either more than less than five years or both.
I'm President of Twitter. But I started out like the rest of you, piddling in the darkness with words.

I kept going, writing jokes and such, and somehow, not getting worse. ​Since then, I've had support from many funny people on the inter net, and can now say with confidence that I am an amazing genius with the mental agility of a thousand standard geniuses. Gezundheit.

Anyway, I stuck with it. I set up a Tumblr page for longer bits of writing, all the while hunched over a rock with a crayon, putting the finishing touches to a very silly book. Next I wrote sketches, stories, you name it.

Could have stopped there, but I didn't; in fact, the whole thing spiralled out of control, with Crimer Show (Twitter's first show). That finished in 2014, and I repeated it on Crimer Reruns, adding so much extra content (TV previews and reviews; ads; comments) that my brain began to melt.

You might have heard of some of them. You've certainly heard of them NOW.

In February 2013, I won two Comedy Poop Irish comedy awards, for Best Tweets and Best Joke Writer, which is nice, because people voted. Strangers, no less. Crimer Show was nominated for one of Stuff.tv's 2013 Stuff Awards and featured in a TED talk.

Got myself an agent, thank you very much. Her name is Natalie Galustian and she's the boss.

But wait! Then, I wrote a book!
The book has just been published by St. Martin's Press, and you can buy it!.

Other stuff in the pipeline: another 7 books (on top of Why The Long Joke, which has just been published by St. Martin's Press in New York), TV things, radio things, theatre things, so many things. Things.

And I'm open to offers. Take a look at some of my Writings. Amble around the site. Buy my Book. Feel free to get in touch with my agent.

Aside from that, I write and write and write, make music, watch BBC4 and Pages from Ceefax, listen to a lot of disco, eat food and breathe regularly but not excessively. Who gives a crap anyway.

I'm also writing for the New Yorker's Shouts and Murmurs section and blogging occasionally for The Huffington Post (UK), so there's that.

You're still reading this? Then you've clearly got time on your hands. Explore!

On the 11th of May 2012, I gave an interview to myself on Twitter. It could also be said that I interviewed myself. Here is the resulting interview.

Me: Thanks for agreeing to do this interview. I know you're busy.
Me: Sure, no problem. What magazine is this for?
Me: It's for Time Magazine Boobs Edition.
Me: Great. I have a subscription. So, what would you like to know?
Me: Well, let's start with your early life.
Me: Wait, is this interview set entirely in the past?
Me: Well, mostly.
Me: Okay. I can do this. How many things do you need me to remember?
Me: One per year? Or thereabouts. That okay?
Me: Fine with me. Do you want to know about the time I was born?
Me: Absolutely. Was it a positive experience?
Me: Being born was the most positive experience I had had up to that point. I couldn't remember a happier time.
Me: But wasn't your birth fraught with complications? Such as copyright issues and allegations of bribery?
Me: Lies.
Me: This is clearly a touchy subject.
Me: No, not at all. It's just that I hoped all of that was behind me. I've grown.
Me: Let's move on. It's fair to say that your childhood was full of incident.
Me: Oh yes. On a second-by-second basis.
Me: For example, your presidency.
Me: Yeah - due to an administrative error, I was president for exactly one second.
Me: Was there much paperwork involved?
Me: To be honest, I wasn't focused on paperwork back then. I was more hands-on.
Me: Did you meet anyone interesting in your time in office?
Me: There simply wasn't enough time to schmooze. Pity.
Me: Looking back, would you do things differently?
Me: Definitely. I would have gone to war with the Pacific Ocean.
Me: Really? Why the Pacific?
Me: Oh, it knows what it did.
Me: It's important to note that you were only 6 at the time.
Me: I wasn't ready for the presidency. I see that now.
Me: Was school a happy place for you?
Me: Not my own school, no. But I did get lost once and find another school.
Me: It says here that you excelled at sports.
Me: That's not for me to say. I mean, I captained the computer team.
Me: Your school had a computer team?
Me: Not technically. I trained some computers to swim.
Me: Computers can swim?
Me: They can be taught the basics. You can lead them to water. They're allergic, I think.
Me: Did you make many friends in school?
Me: What do you mean by that?
Me: Well, I just- are you angry?
Me: Maybe.
Me: Well, it's a simple question. Did you or did you not have friends in school?
Me: I can't entirely recall.
Me: You can't recall having any friends?
Me: Well, I do remember playing Russian Roulette with the school counselor.
Me: Tell me about the shooting.
Me: How did you know about that? Man, the shooting. Yeah, I shot a balloon dog.
Me: But why would you shoot a balloon dog?
Me: I was aiming for the clown.
Me: What have you got against clowns?
Me: Nothing whatsoever. But this one owed me money. We had a lemonade stand.
Me: Can we talk about the time you disappeared at the age of 12?
Me: Yes, those were the longest 3 years of my life.
Me: What happened? You've mentioned aliens before.
Me: Yes. I was kidnapped and forced to watch Aliens for 3 years.
Me: That must have been...challenging.
Me: I can't begin to imagine what I must have felt.
Me: Wow. So who were the kidnappers?
Me: They never showed their faces. Turns out it was the old computer team.
Me: What did they want?
Me: They wanted to make me watch Aliens for 3 years.
Me: That's all?
Me: They're ruthless.
Me: How did the ordeal end?
Me: The TV broke. I think they were torturing both of us.
Me: When you re-entered society, had you changed?
Me: For a while, I only spoke in snatches of dialogue from Aliens.
Me: Did you feel like an outsider?
Me: No more than any other 15-year-old. But I thought it was the 22nd century.
Me: How did that affect your relationships?
Me: I thought every bedroom was an egg chamber. In a way, I was right.
Me: Did it take long to recover?
Me: Years. I only got my first job - fireman - through overzealous hose wielding.
Me: You have said that you were only ever truly comfortable as a fireman. Why's that?
Me: The antithermal underwear.
Me: You must have seen your fair share of suffering.
Me: Honestly, no. I generally fainted when we reached the fire.
Me: Have you had many jobs since then?
Me: Sure. Dog painter, pencil tester, astronaut, musicianist, nude model.
Me: Hang on - you were a nude model?
Me: Yes, at a school for the blind.
Me: You've lived such a full life. Except for those 3 years when you were kidnapped. What's left to achieve?
Me: Pi.
Me: How do you "achieve Pi"?
Me: I plan to achieve Pi in all aspects of my life. It guides me in all I do.
Me: Such as?
Me: I turn around Pi times before I go to sleep. I eat Pi kg of food each day. I have Pi friends.
Me: And can you recite pi?
Me. Oh no. I refuse to do so on principle; I only permit myself to learn pi things each day.
Me: Some quick questions before we finish. What's your proudest moment?
Me: 1988.
Me: Dream dinner party guests?
Me: A dozen clones of Henry VIII and the real one. I'd shoot one every 5 minutes.
Me: Finally, what's your motto?
Me: Always shoot yourself in the foot BEFORE putting your foot in your mouth.
<<< ASTONISHING SOD: HOME >>>